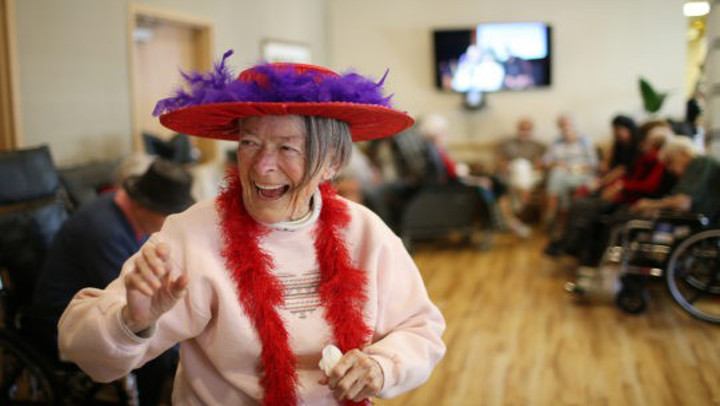 It doesn’t really matter whether it’s a goofy photo of Bob Hope or a glam photo of Rita Hayworth. What matters is how sharing these photographs helps stimulate memories for those challenged by Alzheimer’s and other forms of dementia. And no one understands this better than the team at our Chelsea Place memory care community in Aurora, Colorado.

One of the advantages of a person-centered community is that unique and creative ideas that benefit the residents are always welcomed. So when Ken Gustafson, executive chef at Chelsea Place, suggested to Jennifer Seaman, life engagement director, that he bring in his Hollywood collection of autographed photographs from his wife's Dream Theater in Russell, Kansas, the answer was a resounding “Yes!”. The result was a Hollywood-themed walk down memory lane, with plenty of sizzle and glamor as the photographs, presented in the festive setting, rekindled long term memories for many of the residents.

One such resident is Warren Cateron, a 95-year old World War II veteran. Warren took one look at a photo of Bob Hope and recognized him almost instantly. And for 90-year old Ruth Updike, the photos brought back memories, not only of the stars, but of watching the films with her husband so many years ago. She remarked “I remember watching westerns with my husband on our ranch, and I remember riding my horse, and his name was Whiskey.”

Moments like these are precious at Chelsea Place, especially when a resident’s loved ones are present. While the resident may not remember his or her own children, they can still connect to them by sharing other memories. And that is a good thing. As Jennifer Seaman relates, “It’s drawing all of those things out by just standing in front of the room and literally holding a photo.”

The photo collection included over 40 original autographed black and white still portraits of Bette Davis, John Wayne, Rita Hayworth and many more stars of the era. The photos of Rita Hayworth are especially poignant as the talented and beautiful actress died of complications relating to Alzheimer’s back in 1987.

The Hollywood photo event at Chelsea Place serves as a reminder that sharing old photographs can be a key towards stimulating memories that otherwise may have gone untapped. The power of a simple old back and white photo to unlock an old memory never ceases to amaze our residents, their families and our Anthem team.

Nothing illustrates this better than the glow on the face of 90-year old Ruth Updike when showed a photo of John Wayne. “Oh my heavens,” she exclaimed. “He’s one of my favorites.” Somehow, that simple statement makes it all worthwhile.