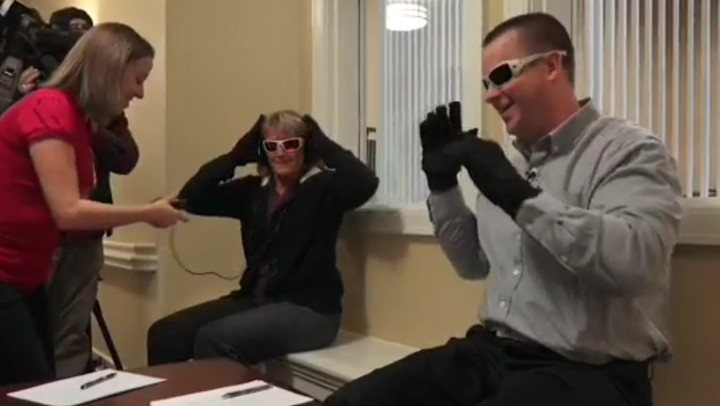 As sympathetic to others as we all try to be, it's very difficult to imagine the world through the eyes of an individual suffering from dementia. But it’s not “virtually” impossible.

Anthem Memory Care’s Morningside Place, in Overland Park, Kansas, uses virtual reality tools that work together to mimic what an individual with dementia deals with every day. The “Virtual Dementia Tour” provides just a taste of what being locked in the debilitating world of dementia might feel like.

So, when the Overland Park Police sought a way to build greater sensitivity and awareness when dealing with individuals with dementia, they turned to Morningside Place for help.

“With Alzheimer’s soaring, first responders will be coming into ever more contact with people with the disease,” said Peggy Hackett, executive director of Morningside Place, in a recent interview with the Kansas City Star, who was on hand to cover the Police Virtual Dementia Tour. You can see the video here.

For the officers participating in the tour, the experience was eye opening. Wearing glasses to blur vision, thick gloves to impede finger movement, shoe inserts to hinder walking, and earphones emitting a stream of discordant sounds and voices, they entered the world of dementia with a resounding crash.

Each participant was instructed to conduct simple tasks, such as filling a glass of water from the sink, putting on a sweater and folding towels. But they quickly found how just how difficult “simple” tasks can be.

Police Officer, Debra Guieb, reported forgetting what she was supposed to do immediately after receiving the instructions. Detective, Keith Hruska, struggled even to pour water into a glass. Both remarked how helpful this kind of exercise was to help them better understand the overwhelming challenges of living with Alzheimer’s and other forms of dementia.

While medical researchers are learning more about dementia and Alzheimer’s every day, there remains much we do not know, and much we cannot understand. Because, unlike other diseases in which patients can explain their symptoms, those impaired with dementia are not always able to explain to us what their world looks and feels like. So programs, such as The Virtual Dementia Tour, are great ways to connect us to a tiny corner of this relentless, debilitating disease.

And, for Overland Park Police, the benefits are tangible. As Officer, Debra Guib, remarked to the Kansas City Star, “I think it’s important that the community and sufferers and their families know that we care.”

Programs like the Virtual Dementia Tour will certainly help them to do just that.