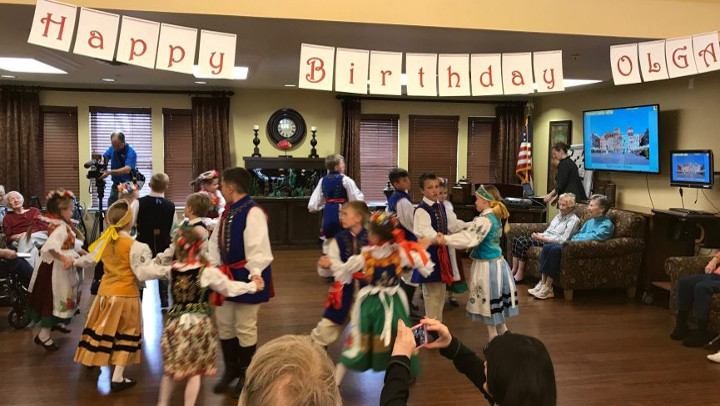 A cruel consequence of Alzheimer’s disease is that it can rob its victims, not only of their memories, but of their ability to speak. Such is the case for Olga Lorentz, who can no longer personally recount her extraordinary story of survival as a Polish street medic during World War II. Fortunately, Olga’s daughter, Danusia, knows it by heart.

Earlier this month, Highline Place Memory Care in Littleton, Colorado, hosted a lively 90th birthday celebration, complete with authentic Polish folk dancers, to honor Olga and her amazing story. It is a story of courage and perseverance in the face of almost insurmountable hardships encountered living and working in Warsaw in the middle of World War II.

During a recent interview with The Denver Post, Danusia described Olga as a vibrant, headstrong young woman. “Olga actually fibbed about her age to become a street medic in the Polish Scouts at age 17,” Danusia told reporters. Then, as a medic, Olga found herself right in the middle of the action, providing aid to wounded comrades.

Olga’s father, publisher of an anti-Nazi newspaper, along with her sister, were killed early on as Nazi troops proceeded to invade and brutally ravage Warsaw and its citizens. Yet Olga managed to survive. Sustaining bullet wounds during the 1944 Warsaw Uprising, she was forced to walk for 18 miles to an outlying town to work in a warehouse. From there, Olga was sent to a woman’s camp where she continued to experience brutal treatment in the hands of the Nazis.

Yet, against all odds, Olga managed to press on. Her reward was an eventual escape to the United States, where she married Leopold Lorentz, settled down and had three children, including Danusia.

Danusia, along with Highline Place Community Relations Director, Jodi Cornman, organized the celebration, which included dancers in traditional Polish attire, Polish flags and plenty of great Polish music. Olga smiled throughout the performance, as did her fellow residents, enjoying the lively and colorful display.

As Renee Paul, a family friend told the Denver Post, “She saw horrific, horrific things. I asked her once, ‘How do you ever get over it?’ And, she says, ‘You don’t. It doesn’t go away. It never stops hurting. You just put it aside.’ She’s a strong lady.”

At Anthem Memory Care communities, such as Highline Place, we are deeply moved by the personal stories of our residents. Everyone has a story that is unique to them and to their family. And each deserves to be respected, cherished and celebrated.